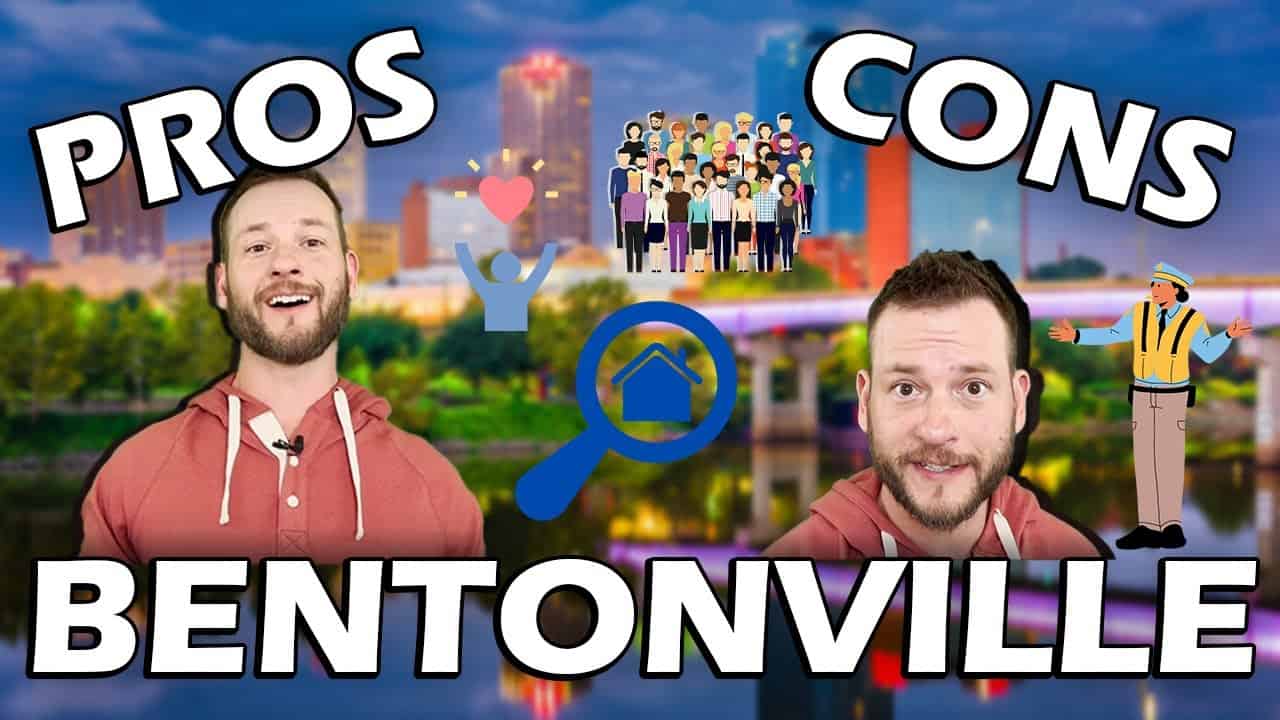 Are you considering making a move to Bentonville and are wondering what it’s like to live here? In this
episode of Naturally NWA, I’m going to give you the pros and cons of living in Bentonville, Arkansas.
We’ll explore some new developments and updates going on in this city since 2020 so you can decide if
Bentonville is the best choice for you.

So much has happened since I last told you about the pros and cons of living in Bentonville in 2020. I
thought now would be a good time to do an updated version so you can see what has changed and what
remains the same—starting with the pros.

The first pro of living in Bentonville is that there is a ton of ongoing development and quality of life
improvements within the city. You’ve probably heard from some of my other videos that Bentonville is
now called the Mountain Biking Capital of the World. This is due to the investment from the Walton’s
and other private money donors.

There are over 118 trails currently in Bentonville with over 130 miles of single-track trails, and more are being developed. Everything you could want—from a booming culinary scene and boutique hotels to
local artisan shops—are a quick bike ride from the trails. Bentonville is also an art lover’s dream. It is
home to the Crystal Bridges Museum of American Art, which boasts a permanent collection valued at
over $450 million. It’s also home to the Momentary, which opened in early 2020. This is a contemporary
art space in downtown Bentonville for visual performing and culinary arts.

The next pro of living in Bentonville is the strong economic climate and job market. Did you know that
400 of the Fortune 500 companies have a presence in Bentonville? There are over 1400 companies with
offices in or near Bentonville that support Walmart’s operations. This is a huge reason why Northwest
Arkansas has more management jobs per capita than anywhere else in the world.
According to an article written by Yahoo News earlier this year, there are more than 10,000 job openings
in Northwest Arkansas—and a shortage of talent to fill those available jobs. An initiative called Life
Works Here was created to attract more remote tech workers and entrepreneurs to the area by offering
incentive programs to relocate to Northwest Arkansas.
This is the second round of the Life Works Here initiative. In this go-around, they’re offering $10,000 in
cryptocurrency plus a bike for applicants that are approved. I want to make a disclaimer here: I heard
that, in the last round, there were only 100 openings and they had tens of thousands of applicants
within the first week. So good luck if you plan on using that to get to Northwest Arkansas. There are a lot
of people that want to move here.

The last pro I’ll mention is the affordability of housing in Bentonville. As of the filming of this video, you
can still get a nice three-bedroom, two-bath, 1700-square-foot house on a quarter-acre lot for under
$300,000. That’s a big difference from my previous pros and cons of living in Bentonville video, when the
same house would have cost you about $225,000.
While the current residents of Northwest Arkansas are feeling some sticker shock when they start
shopping for houses, most of the people relocating here from larger metro areas are amazed at what
their money can buy for the same thing that they would spend way more for in their towns.

Now let’s talk about the cons of living in Bentonville. The biggest con is still the traffic. It’s not always the
number of cars on the road; it’s that the ratio of terrible drivers to good drivers is severely out of whack
here. I blame it on us being so close to Oklahoma.
If you’re like me and you like going AT LEAST the speed limit (though I really prefer going 5 to 10 mph
over, but we’ll save that for another day), you will probably use every single four-letter word that exists
while driving around Bentonville. This is especially true during rush hour times.
Bentonville is a small town with a little over 50,000 residents, but since so many companies have offices
here, people are commuting from all over northwest Arkansas to get to work. The infrastructure is just
not set up for that amount of traffic.

This leads to the next con of living in Bentonville: the population density. Bentonville is the most densely
populated area of Northwest Arkansas, so if you don’t like having neighbors close to you, Bentonville is
probably not a good place for you to live.
Currently, the demand for housing drastically outweighs the supply of homes for sale in Bentonville. You
can expect to be in multiple offer situations on most new homes that hit the market in pretty much
every price range. It’s a good thing that a great realtor like me can provide some excellent strategies to
help you get your offer accepted when you find a home you love.
As previously mentioned, the price of an average three-bed, two-bath home in Bentonville increased
from $225,000 in 2019 to just under $300,000 in 2021 and early 2022. Of course, there are more
affordable cities to live in in Northwest Arkansas that are within a 30-minute commute from Bentonville.
If you’d like to learn more about these areas, please feel free to reach out to me via phone or email and
I’ll be happy to help.

The last con of living in Bentonville is that there are still no alcohol sales at retail stores on Sundays. Of
course, you can always go to a bar or restaurant and get a drink. But if you’re looking to drink
somewhere else, you will have to either travel 20 minutes north to the Missouri border or 20 minutes
south down to Springdale to pick up beer, wine, or liquor at a store.
It’s not terrible, but it can be inconvenient for those of us who want our booze in a hurry.
Make Your Home In Bentonville
I hope this gave you some insight into whether or not moving to Bentonville is a good fit for you. If you
have any questions about the area or our local real estate market, please reach out and ask.
Don’t forget to subscribe to my channel so you never miss an episode of Naturally NWA, my show all
about Northwest Arkansas. Stay tuned for more information about Bentonville and the surrounding
areas!