Pros And Cons of Living in Bentonville, Arkansas 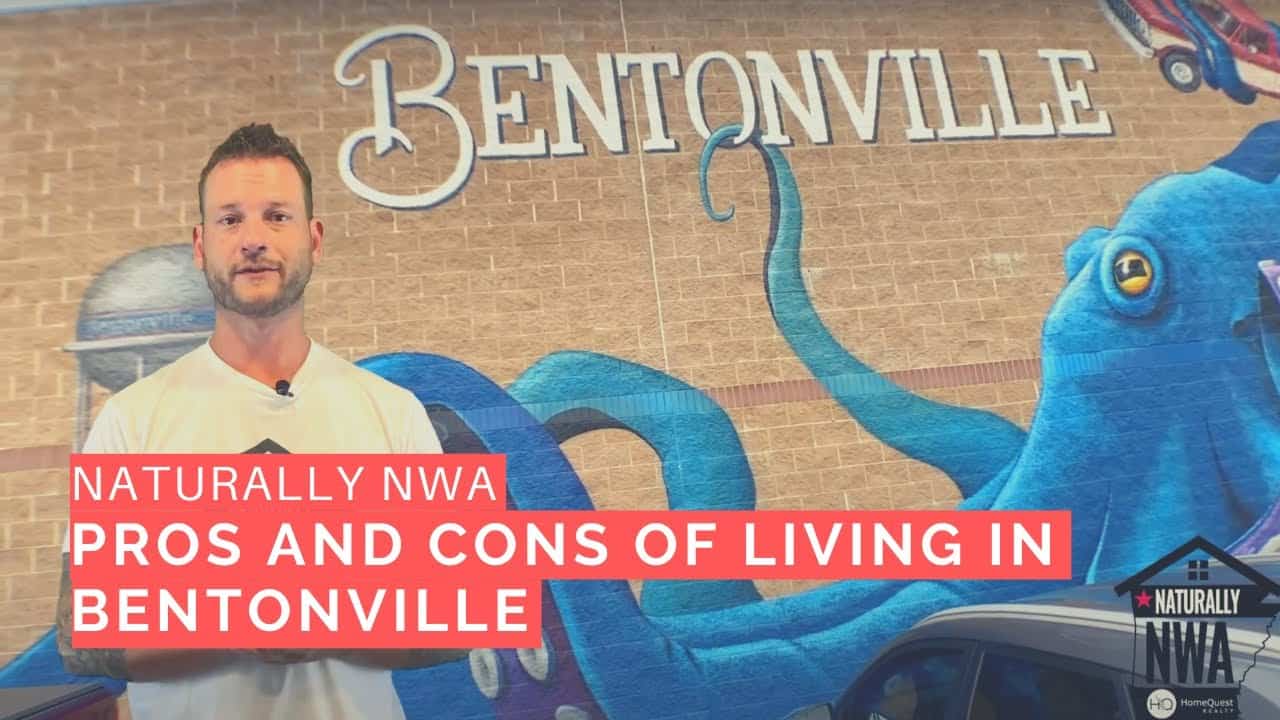 Are you thinking of moving to Bentonville and wondering if it’s the right place for you? If so, I’ve got you covered. In this video, I’m going to walk you through some of the pros and cons of moving to Bentonville. From amazing schools and fun activities to plenty of outdoor space, there’s something for everyone to enjoy in this awesome city.

The Pros Of Living In Bentonville

The first thing people love about living in Bentonville is the schools. Bentonville has the highest rated schools in the state and earned thirteen A ratings from the Arkansas Department of Education state report card—more than any other district in the state. Niche.com states that Bentonville schools are the best in Arkansas, based on ranking factors that include state test scores, college readiness, graduation rates, SAT and ACT scores, teacher quality, and more.

The next thing people love about living in Bentonville is the variety of local events. Many of these activities take place around the historic Bentonville square. In the Spring, there’s a farmer’s market. Live music is a regular occurrence. The Crystal Bridges Museum of American Art’s Night Out and Distinguished Speaker Series is also something that residents of Bentonville look forward to. Throughout the year there are several galas, creative conferences, sporting tournaments, festivals, concerts, fun runs, and all kinds of events for locals to enjoy.

Another great thing about living in Bentonville is its proximity to outdoor activities for the whole family. Bentonville recently crowned itself as the mountain biking capital of the world. There are over 130 miles of trails for riders of all skill levels, with access to another 250 miles of the Ozark trail system. Bentonville is like a ski town but for mountain biking, and you can ride all four seasons of the year. Everything you could want is a short ride from the trails, whether it’s lodging, restaurants, bars, or art museums. The city is also home to 16 beautiful parks. These include Orchard Park—where 4th of July fireworks and summer concerts are held—as well as Lawrence Plaza, which features First Friday Movies in the Park and converts into a splash pad in the warmer months and an ice skating rink in the winter season.

The Cons Of Living In Bentonville

While there are great reasons to live in Bentonville, every city has a few cons. The biggest con here is definitely the traffic. Bentonville is a small town with a little over 50,000 residents, but because Walmart is headquartered in Bentonville, = many of the vendors and suppliers that work with Walmart also have offices here. The roads get very, very congested between about 7:30 AM and 6:00 PM, Monday through Friday. The commute from the surrounding towns and other hubs in Northwest Arkansas can be a little hectic when you’re going to or from Bentonville in the morning or the afternoon. If you’re moving from a large metro area and are used to sitting in traffic for a couple of hours every day, you’d probably laugh at us complaining about the traffic here. But let me tell you, the struggle is real here in Northwest Arkansas.

The next con of living in Bentonville is the population density. Bentonville is busting at the seams, and there isn’t much room for any new houses or businesses to be built with most of the existing houses having been built very close together. If you don’t like having your neighbors really close to you, Bentonville is probably not the best place to live in Northwest Arkansas.

Another con is that the cost of housing is higher in Bentonville than most other cities in Northwest Arkansas. This is mostly due to people’s desire to want to live close to work,  as Bentonville is where a majority of the businesses are. In 2019, the average three bedroom, two baths, 1,700 square foot house in Bentonville will cost you around $225,000. The demand for housing is crazy. If you’re looking at that average price point, you will likely find yourself in multiple offer situations, so be ready to submit your best and highest offer. Rental rates in Bentonville are also higher than most areas of Northwest Arkansas. A typical three bedroom, two baths, 1,700 square foot rental rents for an average of about $1,400 a month in Bentonville.

Is Moving To Bentonville Right For You?